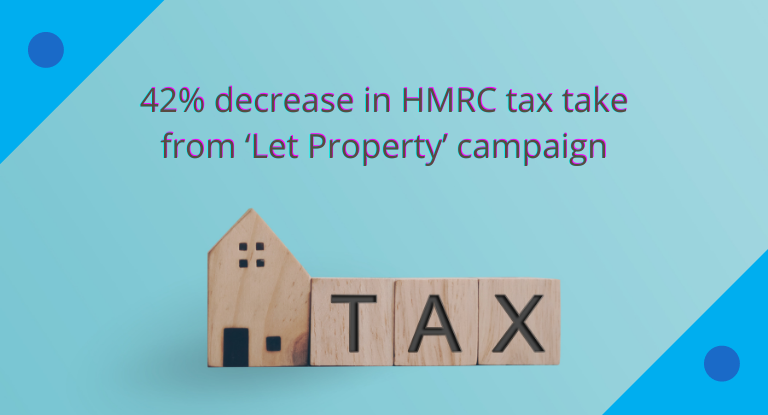 This was the lowest figure recorded in seven years, according to figures obtained under the Freedom of Information (FOI) request by accountancy firm Saffery Champness.

An HMRC spokesperson said: ‘HMRC believes that its customers want to pay the right amount of tax and wants to help those that are not paying the correct amount to put that right.

‘The Let Property Campaign’ is an opportunity for landlords who owe tax through letting out residential property, in the UK or abroad, to get up to date with their tax affairs in a simple, straightforward way and take advantage of the best possible terms.

‘If you’re a landlord and you’ve undisclosed income you must tell HMRC about any unpaid tax and you’ll then have 90 days to calculate and pay what you owe.’

The campaign gave landlords who owe tax the opportunity to come forward voluntarily to put their tax affairs in order and was aimed at those who own more than one property, landlords renting to students, people with holiday lets, and those who let multiple occupancy homes.

When the campaign launched, the government estimated that up to 1.5m landlords had underpaid or failed to pay up to £500m in tax between 2009 and 2010. The government said at the time that if landlords did not come forward voluntarily and HMRC found them first, they could face bigger penalties.

Zena Hanks, a partner in the private wealth team at Saffery Champness, said: ‘HMRC knows an increasing amount about taxpayers and their behaviors from a variety of sources and, as Making Tax Digital becomes the default for most taxpayers, its hand will be strengthened significantly.’

‘HMRC’s use of technology to home in on suspected unpaid tax is only going to increase, with data and information availability improving all the time, and the direction of travel is likely to be an even greater expectation, even demand, for the tax to be paid in real-time

‘Accurate record-keeping is essential, as is planning ahead for the cashflow implications of real-time payments. Landlords should start making plans now as to how they intend to manage the requirements of Making Tax Digital ensure the switchover is as seamless as possible and to avoid the ire of HMRC.’

Since opening the campaign has received 58,779 voluntary disclosures, around 4% of the landlords originally targeted.

However, with a tax yield of almost £190m HMRC has only secured 37% of its original target.

Paying tax and National Insurance due under your PSA

October 6, 2021
We use cookies on our website to give you the most relevant experience by remembering your preferences and repeat visits. By clicking “Accept All”, you consent to the use of ALL the cookies. However, you may visit "Cookie Settings" to provide a controlled consent.
Cookie SettingsAccept All
Manage consent